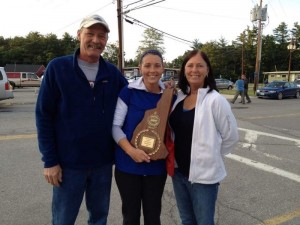 Like so many of our Tenacity staff members, Beth Rogers Lester is a transplant.  She traded the evergreen forests of New England, with its history of witch trials and Revolutionary War battles, for the sprawling city of Houston, Texas, home to NASA Headquarters and a major player in the oil industry.  She brought with her six years of coaching experience in both high school and travel programs, and the phone number of a Houston-area lacrosse coach.  She knew no one—another courageous move from another courageous Tenacity woman!

The lacrosse world is small no matter where you go and Houston is no different, so eventually Beth crossed paths with Tenacity’s Amy Markwort.  “In her two years with Tenacity, Beth has helped raise the overall lax IQ in the region,” Amy says.  “Bottom line is, she knows lacrosse better than anyone else around here.”  Beth played attack for the University of Massachusetts and graduated in 2005.

What does it mean to be Director of Player Development for Houston?

I get to create all the practice plans for all of our programs and do workout Wednesdays.  We also have Tenacity Training Thursdays where we organize an hour and a half in most locations around the city, getting in lacrosse-oriented workouts like tempos and field sprints—focusing on lacrosse fitness rather than generalized fitness and getting stickwork in.  Furthermore, I’m really working on our coach development, building a curriculum and a base for everyone to use so that eventually our practice plans will be skeletal, so that coaches can pick and chose how they want to do to fill out that practice plan.  And I work with players on recruiting, too.

What sets Tenacity apart?  What are the challenges for your program?

The market in Houston is so wide open.  There’s just not a lot, aside from high school teams, for kids to be doing.  There was a program here that focused on development at the middle school age, and they’ve kind of laid the groundwork for what we’re doing.  We’re able now to take those kids and bring them to the next level.  They aren’t a travel program, but they’re more intensive than the typical middle school programs.  They practice a little more often and do a couple middle school play days.  Our biggest challenge is getting coaches, having enough coaches to field all the teams that we could field is difficult.

Our evaluation process is really good and really positive.  We accentuate our written and verbal feedback and that helps a lot with development.  That’s something that’s special to Tenacity.

As a high school coach, you deal with a pretty wide range of skill levels.  How do you balance teaching the new players while also challenging the more experienced players, especially in a try-out setting?

This is my third season with my high school program and I kind of threw the new players to the wolves.  I ran them through the exact same tryout and pulled them aside at the beginning and said, “I know this is going to be a lot of information and it might be frustrating at times, but do what you can, try to figure it out, talk to people, try to figure out who would be a good resource and once tryouts are over, we will help you and slow down.”  No one’s ever quit, so I think it’s been successful.

But, for example, this past high school tryout, I had six kids show up who had never held a stick before.  You end up focusing more on fundamentals, rather than fine tuning and game development.

If you were to coach your high school self, what kind of advice would you give her?  What were your struggles at that age?

I think that when you’re in high school, or when I was in high school, I was always really focused on that fast speed, really pushing the ball—whereas now I think that learning patience and poise as a thirteen, fourteen year old is so important.  Learning to have better vision.  When you sit out for a couple of games, due to injury or a variety of reasons, you get to watch the game and it makes you such a better player.

What has your experience in Houston taught you about coaching?

That sometimes I need to slow down!  Sometimes I over-talk or I don’t think about the vocabulary I’m using. The lax vernacular, if you will.  When I first came down here, I assumed the speed of play and the lax IQ would be exactly the same, and I had to learn to slow myself down and to be more detail-oriented, which was really fun.  I hadn’t had to do that in couple years.  I have kids who are really strong lacrosse players, really smart lacrosse players, but need more guidance and coaching, so it’s fun to pull back and start at that level again.  It’s been a challenge, but it’s been really fun!

What does tenacity mean to you?  Have you seen it in your girls?

Last week, my team had a really tough first half—really struggled to get going.  We were down by five or six, but we got it together during half time and pulled out a win in sudden death overtime.  They didn’t realize that they had that in them, but they found it and tapped into it to pull out the win.  That, to me, is tenacity.